Death on the Diamond

Author: Screenplay by Harvey Thew, Joe Sherman and Ralph Spence from the book by Cortland Fitzsimmons. Thew wrote films as far back as 1916, and his contemporaneous work includes a couple of interesting mysteries. Joe Sherman didn’t have much of a film career but he also wrote Murder in the Fleet and directed three films. Ralph Spence has a huge list of writing credits including the original Tillie the Toiler from 1927.

Cortland Fitzsimmons is a mystery novelist whose name was new to me, but not to my better-read fellow reviewers. Bill Deeck reviewed one of his books and suggested it was “like watching grease congeal”. I wish I’d turned that phrase! Others have a similarly poor opinion of his written work. Fitzsimmons wrote a couple of series of mysteries, including a set focused on different sporting events like football (the 1932 film 70,000 Witnesses is based on that one) and the eponymous book that forms the basis of this film. I have a copy of 70,000 Witnesses and have now been prompted to screen it; if it’s as flawed as this film, I may have another review coming down the pike.

Other Data:  71 minutes long. September 14, 1934, according to IMDB.  Directed by Edward Sedgwick, who directed a long list of films from 1920 on including, strangely, Murder in the Fleet and Father Brown, Detective.

Cast: Robert Young as Larry, the star ball player. Madge Evans as the daughter of the owner of the team, Pop Clark, played by David Landau. The credits confused me for a minute because there’s a character played by DeWitt Jennings whose character (the groundskeeper) seems like it should be named Pop Clark … in fact, “kindly old Pop Clark” would be appropriate. But his character’s name is merely Patterson.

Nat Pendleton plays the team’s catcher and Ted Healy (of Three Stooges fame) plays his nemesis, the umpire who hates being called “Crawfish”. C. Henry Gordon plays a villainous racketeer and Edward Brophy plays the dumb but honest cop. No actual pro ball players appear to have been recruited for this film, although it does have Mickey Rooney in a tiny role as the bat boy. Hard-working Walter Brennan has an uncredited role as a hot dog vendor and Ward Bond is in an uncredited role as a security guard.

Spoiler warning: I must announce at this point that the concepts I wanted to discuss about this film cannot be explored without revealing the ending of the film, and the identity of the murderer.  If you have not yet seen this film and wish your knowledge of it to remain blissfully undisturbed, stop reading now and accept my apologies.  If you read beyond this point, you’re on your own. 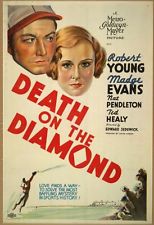 My curiosity about this film was prompted by its recent appearance on TCM, but also because I’ve recently become interested in how films of the 1930s and 1940s co-opted the murder mystery format and combined it with other themes. Recently I looked at a “Western mystery” to see how the two formats meshed. Then this item came along and I started wondering about “sports mysteries”.

My general sense, unsullied by much actual experience, was that the 1930s in Hollywood had produced a number of “sports movies”, simplistic “programmers” whose main theme was the progress of a sports team towards a season’s victory, interwoven with the progress of the team’s best player towards the hand of his best girl and the team’s battle against game-fixing gangsters. Sometimes the sport is boxing or horse-racing and then the team idea dwindles down to an individual. This, I thought, was the same level of entertainment as the typical Western. The hero cowboy bests the rival ranch, or the crooked rustlers, or the railroad baron, and gets the girl. The audience has low expectations and they are usually met, at a low level of inspiration by the screenwriter and low production values by the studio. B-pictures, churned out by the dozens to fill the evenings of Americans before the invention of television.

To be honest, I haven’t bothered to find and screen a bunch of rubbishy old baseball and football movies just to confirm this theory. It is certain that the genre hasn’t survived; today’s viewer has thousands of actual games from which to choose on television at any given moment, in every sport from poker to NASCAR to beach volleyball, and a huge publicity machine to convince the prospective viewer that the plucky team is working hard to vanquish its rivals and overcome huge odds to win the pennant. <yawn>  No one wants to update this genre for the 21st century, which seems more interested in quirky films like Moneyball. We see the occasional film like The Bad News Bears, but this theme has not presented itself by the handful year after year like it used to in the 1930s. I had the feeling this genre was an artifact of the age of film before television, and when audiences became more demanding,the simple sports film collapsed and vanished.

With most such ritualized genres, though, occasionally someone decides to switch up the standard theme and add a murder mystery plot to the mix, mostly connected with the game-fixing gangsters. And this seemed like the inspiration for Death on the Diamond, so I thought I’d give this a good look and see how successful the sports mystery genre might have been had it flourished.

I suspect that sports movie fans were disappointed by the introduction of the unfamiliar mystery plot to get in the way of the “St. Louis Cardinals winning the pennant against great odds and gangsters”, and while mystery fans may have been sufficiently interested to attend, they wouldn’t have left in a good mood. The mystery is, frankly, pretty ridiculous. 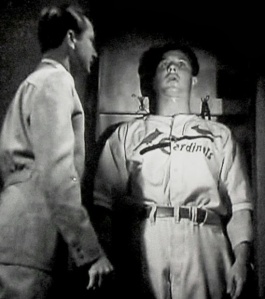 When the film starts, the team is in trouble; Pop Clark has hocked his majority interest to finance the season, and the team must win the pennant or Pop will lose the team. He hires Larry to come in and pitch to save the day. Larry promptly falls in love with Pop’s beautiful daughter, the team’s secretary. Indeed, after a few abortive attempts to injure the players — someone smears “alkaloid” on the inside of their gloves, and runs Larry and the catcher’s taxi into a ditch — at about the 33 minute mark, someone shoots a player just as he’s rounding third base towards home. At the 47 minute mark, a strangled player falls out of a locker and a few minutes later Nat Pendleton’s character is killed when someone poisons the mustard he smears on his hot dog.

We are aware that there’s a phalanx of gangsters who stand to lose nearly a million dollars — this sum is announced in hushed and reverential tones — if the Cardinals win. They have a motive to do violence to team members, of course, and apparently they do. But of course there is another murderer. This is meant to be a surprise twist at the end; truthfully it will not be a surprise to anyone who has seen more than a couple of films.

I have spoken before about the tightly-timed scripts of movies (and television programmes). Every word, every action, even every camera angle is carefully chosen to communicate a maximum of information as tersely as possible. This film is no exception. But when everything grinds to a halt in the first ten minutes while the kindly old groundskeeper establishes that he goes back a long way with Pop Clark, and thinks he knows more about baseball than anyone on the team, well, we either have the murderer or 90 seconds of useless information. And Hollywood very rarely provides 90 seconds of useless information.

Similarly, throughout the movie, the kindly old groundskeeper does things like show up having coincidentally found the rifle with which the player was shot on the field — and got his fingerprints all over it, silly old man — and we know this is not an accident. And every time he shows up, he gets a little crazier and a little phonier and a little less believable (he never actually does any groundskeeper’s duties on screen).

By the time the team is playing the “big game” at the end of the film, and we see the traditional shadowy figure with claw-like hands lurking in the dugout, everything is obvious; the kindly old groundskeeper is a loony who thinks he should be running the team himself and is responsible for the murders. Larry is pitching on the mound and sees someone in the dugout slipping something into the pocket of his hanging jacket, so Larry throws an unbelievably accurate beanball an unbelievably long distance and knocks out the mysterious figure. Larry’s pocket turns out to contain a bomb, which detonates harmlessly. the groundskeeper is arrested and goes ostentatiously crazy before confessing; Larry wins the game and gets the girl as the closing music swells. 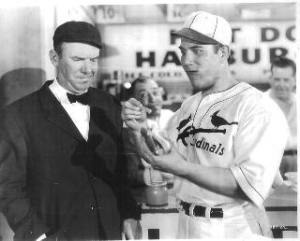 There are so many inconsistencies and logical flaws in this movie that I could go on for a thousand words about them. Why do the gangsters start to intimidate but cease their threats when the murderer starts in? Why is the umpire on the scene two weeks before the season starts? Why does the baseball game start up again ten minutes after the base runner is shot and killed? Why do the media not make more of a series of murders taking place on a professional sports team? (Think about what would happen if someone started killing off real-life St. Louis Cardinals in the dugout this year. CNN would be parachuting reporters into the outfield during games, trying for interviews.) Why do all the players never seem to do anything except stand around? Where did the groundskeeper learn to make a bomb that looked like a wristwatch? What on earth is an “alkaloid” so distinctive that it can be recognized by smell, and why would it be activated by body heat? Why is there a black sleeve on the arm poisoning the mustard, when moments later the groundskeeper is shown wearing white? Why is Madge Evans the only woman in the universe? But really, this film is just so uninspired that no one will ever really care. Indeed, there are not enough baseball scenes to please baseball fans and there is so little mystery that no one over the age of 10 will be troubled to solve this before the 60-minute mark. Nothing makes sense and everything is a cliche. Bah.

A fellow reviewer more interested in baseball than mystery called this “the Reefer Madness of baseball movies” — he was aggrieved by the lack of anyone wanting to stop the game for little things like the pitcher getting murdered. He suggests a wide variety of themes for baseball movies that are worth repeating — and that are not represented in Death on the Diamond. “It isn’t about a rookie’s struggles fitting in.  It isn’t about underdogs struggling to win the pennant.  It isn’t about the struggles of a veteran losing his skills.  It isn’t about the relationship between different generations of men.” No. None of those things. Trust me, there is nothing here that you need to see.  So unless you have some peculiar and idiosyncratic reason for screening this — for instance, you want to try to spot Walter Brennan in his three-second appearance in the sequence where Nat Pendleton is smearing poisoned mustard on his own hot dog (is that him at the far right of the photo?) — really, don’t bother.

I was unable to locate a copy of this on Amazon or other traditional marketplaces, but TCM screened it in mid-August 2013 and is not shy about re-running its movies once or twice a year.