Perry Mason in the Case of Too Many Murders, by Thomas Chastain (1989; authorized by the estate of Erle Stanley Gardner) 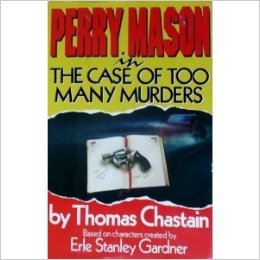 What’s this book about?

Well-known businessman Gil Adrian shoots and kills his dinner companion in full view of a restaurant full of witnesses, then escapes. A short time later Adrian is found murdered in his Hollywood Hills home. His ex-wife is the immediate suspect, and she turns to well-known courtroom wizard Perry Mason. Perry investigates the late Mr. Adrian’s business and romantic entanglements and his very, very busy life, and although his client seems determined to dig her own courtroom grave, he manages to work out what really happened and how, and brings the crimes home to a murderer who has been heretofore not considered by officials as a suspect.

Why is this worth reading?

I could answer this easily by actually answering the question above in a snide way. The first thing that came to my mind when I looked at my standard “What is this book about?” was “About 256 pages too long.” But the real answer to “Why is this worth reading?” is, “It just isn’t.”

Nevertheless, I’ll try be a bit more detailed. When considering whether to — or, these days, when to — issue “continuation” volumes using the characters and oeuvre of a deceased best-selling author, it seems as though the heirs have a couple of things they think are important, but only one at a time. Some estates go for sales, and some for safety. The ones who want sales, like the James Bond franchise, license the character to a lot of interesting writers, some of whom are relatively disastrous and one or two of whom knock it out of the park; once in a while they have a best-seller, and the rest of the time they have some steady sales. The ones who want safety are somehow timid; “We don’t want to actually CHANGE anything about Grandpa’s beloved character, we just want a couple of original stories that don’t contradict anything and don’t offend anybody, because the fans would buy Grandpa’s laundry lists if we bound them.”

I can’t say anything about Erle Stanley Gardner’s laundry lists, but the rest seems to be just about what happened here. This book is, in fact, arrogant; it is arrogant because it assumes that the reader is stupid and hasn’t been paying attention.  I think I can explain this without spoiling any enjoyment you might have in reading this if you were recovering from brain surgery and needed something simple for distraction. The whole book is built around a trick; something like John Dickson Carr or Agatha Christie, except that this trick is horribly terribly obvious from the first chapter. I think even if you had never read a murder mystery before, but only seen them on television, you would grasp what was being dangled tantalizingly before you as being, to quote the back cover, “a fiendishly twisted puzzle” — “the most baffling case of [Perry Mason’s] career.” No, it’s not. The police miss the idea, the detectives and suspects miss the idea, but to this reader at least it was absolutely obvious, and everyone was off on the wrong track.

After setting the path towards the big reveal, Chastain proceeds to muddy the waters with a few trails of red herrings about the victim’s generally evil tendencies and people whom he’d recently wronged. But all the time, dropping little references to a concept that is the base of the trick. I think you have to have read the book twice (heaven help me, I did) to grasp all the little hinties and word choices. But then about two-thirds of the way through the book, it’s as though Chastain realizes that evidence that satisfyingly demonstrates a criminal’s guilt in a way that is connected to the trick is not going to be possible, but the reader still has to be almost able to solve the crime even though the hints are gossamer-thin, and he has no physical clues to offer. So he starts dropping bigger and bigger hints about the underlying concept, and finally a huge one that ends in Perry Mason saying, “(face palm) By golly, that’s the ticket! I should have realized that 180 pages ago!” Which was when you and I and everyone else over 14 realized it. 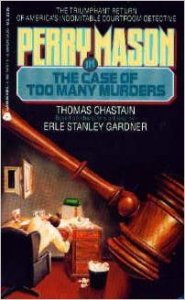 But the real problem with this book is that the writer, Thomas Chastain, has what I have to call a tin ear for dialogue and description. It’s not often that this happens to me, but I hit a single word in this novel that struck me as being so off, so impossibly wrong and leaden and regrettable, that it stopped me dead in my tracks and I put the book down for a minute. Paul Drake, Jr. — the book follows the characters of the made-for-TV movies — is, as most of you will remember, a handsome curly-headed cheerful guy who’s a fairly tough PI but scores with the ladies. On page 207 of the paperback, Perry asks him, “Do you think your buddy, Dumas, will notice that you’ve gone?” “I already bade him good night. He won’t miss me as long as his bottle holds out.” My word was “bade”. As far as I’m concerned, Paul Drake, Jr. never “bade” anyone anything EVER. The book is full of big clanging wrongnesses in dialogue like, for instance, Perry using carefree contractions and talking imprecisely. And for the rest of it, the writing is … mushy. The prose is bland, the descriptions are insubstantial and careless, and the characterization is non-existent. Okay, I recognize that Gardner was not known for characterization, but honestly, we don’t know much about most of the characters at all, except from context. It’s like they have one-word character descriptions hanging around their necks and that’s all you get.

So finally I’m into the home stretch and thinking, “Well, he has to do something to make this book come alive, or even gasp for breath. I suppose he’ll work some kind of clever reversal on the ending I foresaw on page 12.” And I came up with a couple of ways that that could be done, and I was actually taking a little interest, when — bang, yeah, it was the ending I foresaw on page 12. I don’t actually throw books across the room, because I usually hope to sell them some day, but holy moly it was tempting. This book is start to finish irredeemably awful.

Thomas Chastain was involved in the Who Killed the Robins Family? game/book/publicity stunt thingie from the early 80s; he co-wrote novels with, of all people, Helen Hayes and Peter Graves. (What we call an “open ghost”.) He wrote a Nick Carter novel, for crying out loud, and one that a critic called “undistinguished”. Wow, you have to work hard to not quite manage to pull off a Nick Carter novel. In fact, Chastain can’t write a lick, and he dragged this project and this franchise down with him. I know that Parnell Hall, an excellent writer, wanted to take over the franchise — if you’re interested, look at the first couple of Steve Winslow novels as by J. P. Hailey, because he told me that’s how he repurposed the novels they didn’t buy. They read very oddly but very satisfyingly once you know the secret, and I bet you will join me in wishing that he would have taken over the franchise instead of Chastain. As it is, Chastain wrote one more of these (TCOT Burning Bequest) and the print franchise died an unhappy death. I would suspect that his performance here was under the strict and stern guidance of the estate — it just seems like that to me, because it’s all so damn bland — so I bet he tried his best. But what an ignominious end this was to such a great franchise!

Very few editions exist, thank goodness; to the best of my knowledge, one hardcover (Yes! For the library trade) and one paperback.  Both are shown here and both are undistinguished. The hardcover edition reminds me of the colours and layout of the Chastain-written Robins family book that was everywhere one summer in the 80s. I actually hope no further editions are published. It’s difficult to find a mint copy of the hardcover with the original sticker on the front saying “Perry Mason returns!” so that might be my favourite; I think I have one in a box somewhere and some collector will want it someday to complete her Perry Mason collection. Don’t say I didn’t warn you.

4 thoughts on “Quick Look: Perry Mason in the Case of Too Many Murders, by Thomas Chastain”