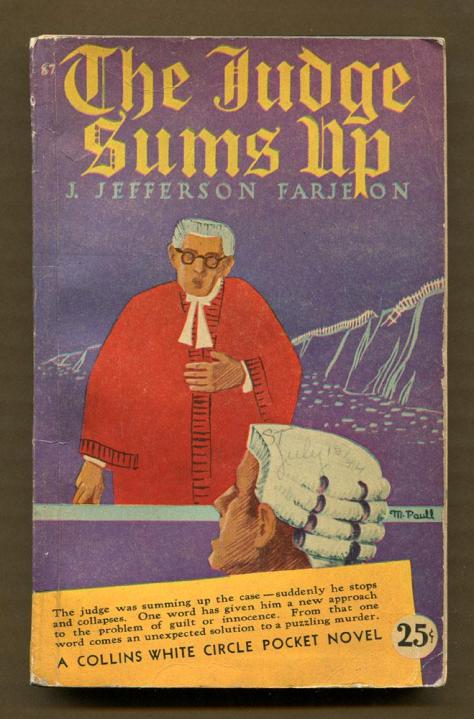 What’s this book about?

Mr. Justice Unwin is summing up a great deal of evidence at the trial of Peter Gaskell for the murder of Walter Drage. In an extended flashback, he sums up the evidence by, for, and against the prisoner. Gaskell and Drage were staying in a rural hotel, Gaskell recovering from a breakdown from overwork. They both became involved with the same pretty young girl, and at the end of a week the evidence ends in a great mass of detail about the last hours leading up to Drage’s body being found at the bottom of a seaside cliff. We meet and hear from chambermaids, a hotel manager, various other guests at the hotel. We become very familiar with the ways in which barristers at trial are guided and corrected by the judge as to the admissibility of various kinds of evidence. We peek into the thoughts and preoccupations of the jurors, learned counsel, and even the judge himself, who apparently solves crossword clues in one part of his mind while summing up with another.

As Mr. Justice Unwin approaches the last phase of his summing-up, having left the reader with the impression that Mr. Gaskell is going to be found immediately guilty by the acquiescent jury, he has a mild heart attack and the trial goes into abeyance until he recovers.

The second half of the book depicts the activities of investigator Morley Aston, who travels to the hotel with the intention of overturning the case against Gaskell. As we meet people whom we’ve previously seen testify, and hear them tell their stories in a different context and manner, a completely different picture of the events of that fateful day begins to form in the reader’s mind. As Aston investigates, he collects sufficient evidence to bolster a surprising new theory about the murder case; this is explained to the reader in a long chapter, and the final moments are devoted to an unusual ending to the trial, once the Justice returns to the bench.

Why is this worth reading?

J. Jefferson Farjeon has recently enjoyed a resurgence of interest, thanks to the republication of his Mystery in White by British Library Crime Classics to delighted critical and public reception. And rightly so, judging by this volume. It is a very intelligently written work of classic detective fiction and I highly recommend it. I haven’t gone into too much detail about the events of the book; I think it’s very unlikely that most of my audience will have already read it, which is not the case with many of the books about which I’ve written. This is such a clever little mystery that I don’t want to spoil your enjoyment once you do manage to find a copy (there’s every chance this will soon be reprinted).

You will note on the cover illustration of the first paperback edition (and pretty much the only paperback edition, as far as I know) that the judge has noticed a single word that “has given him a new approach the problem of guilt or innocence”. This is in fact true; unfortunately I worked out the word to which the cover refers and it helped me work out the approximate solution before the end of the novel. It spoiled my enjoyment just a little, because it was truly an elegant and detailed solution that had been painstakingly created to take the trial evidence and turn it on its head. I think of this kind of novel as a “snowglobe mystery” — halfway or two-thirds through the book, the author gives the plot a shake and all the familiar features and inferences of previous events are transformed into something with a different, nearly opposite meaning. Perhaps it’s that I have a fondness for this kind of plot, which is difficult to manage. But if you enjoy Golden Age Detection classics I think you will enjoy, and be surprised by, this book. So pardon me for not telling you much about it; just this once, trust me. If you like Anthony Berkeley and Christianna Brand and Freeman Wills Crofts, you’ll like this book too.

And if you haven’t managed to work out the crucial word, the judge’s thoughts explain its importance in the final sentence.

I’ve only ever seen the edition at the top of this post; I have a rather more bedraggled copy than shown here. Collins White Circle paperbacks were not well made, for the most part, and many have disintegrated over the years. I’m aware of about three other editions including the first, which has an undistinguished type-only cover, and a strange publication as an insert into a Philadelphia newspaper in bedsheet format. There don’t seem to be any beautiful editions; the Collins White Circle has at least the charm of being ugly in a naive retro way.