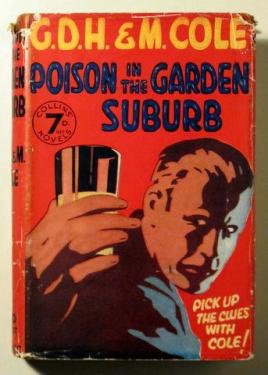 I’ve reviewed a book by the husband-and-wife Coles recently and I have to say, if it’s not clear, that I managed to find one of their less-well-written books to look at — but their books are so scarce and expensive that I think that’s one of perhaps three I have in my library. Even that excellent site, stopyourekillingme.com, doesn’t have a listing for their published works and so I’ve sent you to Wikipedia. I’ve heard it suggested that mediocrity is a reason why some authors remain in obscurity but, honestly, I don’t think that should apply to the Coles. Their mysteries really are worth reading; they were both important writers and opinion leaders in various political spheres and that quality of intelligence in my experience usually produces clever and intelligent mysteries. I certainly enjoyed Death of a Millionaire, and I don’t think it would be spoiling your enjoyment to say that it reminded me of both the best of the Humdrum school and a particular Philip Macdonald novel. The Superintendent Wilson novels will be your best starting point to appreciate the Coles’ work, and that earlier novels are more likely to be to your taste than later (they get rather more political as time goes by). My friend Curtis Evans, whose blog is here, is an expert on the Coles and has a learned book that looks at the full body of their work, a privilege afforded to few but the diligent, that I bought the day it came out.  You can get your copy of The Spectrum of English Murder here.

The author of Sherlock Holmes shouldn’t need much recommendation from me, but I’ll bring his name forward anyway. As I’ve said, I don’t automatically recommend writers just because they’re well-known, but Conan Doyle stories are really enjoyable reading, by and large. He had a really appealing writing style — a great eye for description, beautiful word choices, simple and direct chains of ideas without too much foofaraw.  I admit sometimes I’ve been annoyed when Sherlock Holmes picks up a clue and, without showing it to the reader, tucks it in his pocket until the denouement. But that was before the “fair play mystery” idea had even been thought of, so I don’t blame him for not fulfilling my expectations. Sherlock Holmes is a character for the ages, and, to disclose fully, I have him tattooed on my chest. Yes, really. I’ve read each of the stories countless times and can always find something new to think about. And if you don’t like reading in the antique style of language, then I recommend you seek out the television series that did all the stories as accurately as possible, starring the wonderful Jeremy Brett. If you’re looking for something of his that isn’t Sherlock Holmes, you might try The White Company, a historical novel that I understand was his personal favourite of his own works. 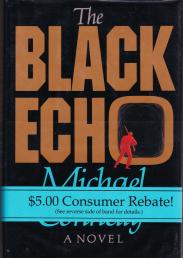 It is true that I don’t read much these days that was written after about 1950, but a damn good writer will always get my attention. I can remember finishing the last page of 1992’s The Black Echo and immediately starting it again from page 1, because it was so elegantly and lyrically written that I didn’t want to leave. By the way, it won the Edgar in 1993 for best first novel. I think you will agree with me that Connelly’s stories about Hieronymous (Harry) Bosch, a homicide detective in Los Angeles with a sad and troubled life, are magnificent. Start from the beginning and savour these powerful and intelligent novels. Connelly’s work has been made into a couple of good movies; 1998’s Blood Work, a very smart novel, had its ending changed when they made a smart movie out of it in 2002, with Clint Eastwood. That means you get to have two bites at the apple of solving it. Connelly himself, by the way, makes the occasional appearance in Richard Castle’s writers’ poker game on TV’s Castle. 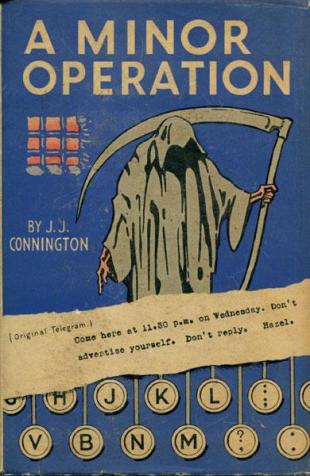 As well as reawakening my interest in the Coles (above), I’m also indebted to Curtis Evans for reminding me just how good a mystery writer J. J. Connington was. His extremely significant volume of critical analysis from 2012, Masters of the Humdrum Mystery (buy your copy here and I highly recommend it; you’ll gain a lifetime reading list from it) spends about a third of its time discussing J. J. Connington (under his real name, Alfred Walter Stewart, apparently no relation LOL).  Connington novels used to be an extremely difficult thing to acquire in the used book market, but these days with ABEBooks and eBay, and the fact that he’s completely in print at the moment thanks to Dr. Evans, you can look forward to an enjoyable set of volumes. These are classic British puzzle mysteries from the true Golden Age, the genuine whodunit. Connington’s intelligence and creativity shine through these stories. At his very best, he takes the reader on a guided voyage through a set of interesting facts and allows you to arrive at the wrong conclusion, then dazzles you with what was really going on. I very much enjoyed being hoodwinked by all those I’ve been able to read so far; The Sweepstake Murders stood out, and so did Case with Nine Solutions when I reviewed it here.

The 17 novels featuring Mario Balzic, a police chief in a small Pennsylvania town — well, you may think they’re just too artistic to be thought of as “only” mysteries. To me, this is what the idea of genre fiction is all about; really great genre fiction transcends itself and becomes a story that can be appreciated by anyone, even if they’re not familiar with the genre’s historical and popular forms. Constantine writes at an elegant and lyrical level while talking about simple and ordinary things. There are a few mystery writers who manage it; the poet Stephen Dobyns does it, Dashiell Hammett did it, and so does Constantine. These are plainspoken stories about ordinary people whose lives have somehow gone a little wrong. They’re inarticulate and in pain. Chief Balzic has to put things right as best he can, with the profundity only available to a wonderfully ordinary and real man. His love for his town and his fellow man is what sustains him, I think. Start at the beginning with 1972’s The Rocksburg Railroad Murders, reading in order, and you will see how the writer grows the character lovingly over the next 30 years and shares that growth with us. 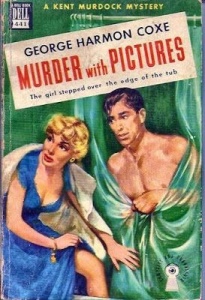 George Harmon Coxe was a prolific writer of pulpy mystery novels — many of them about hard-drinking newsmen who solved crimes, and in general about hard-punching men who squared off with violent criminals. His books were a mainstay of the early Dell mapback series, which is where I picked up the taste for them. The Kent Murdock stories about a newspaper photographer on the crime beat in Boston are quite a bit more literate than you might imagine from looking at the salacious artwork. As was not always the case in the days of pulp, the stories make logical sense; they’re about ordinary people trapped in desperate situations who do what we might do, and yet there’s always a beautiful dame in trouble. There’s a number of writers who were mining this vein, but I like Coxe the best. Start with Murder with Pictures, proceed chronologically, and see how many Coxe stories you can acquire in the original mapback edition just for the verisimilitude.

I don’t really read private eye novels any more, but Robert Crais’s name on a new novel always makes it into my to-be-read pile anyways. He’s another of the writers like K. C. Constantine, above, who writes so beautifully that he could transcend his genre. But Crais is completely grounded in the traditional private eye novel and perhaps doesn’t care about transcending the genre, thanks very much. He just wants to write interesting, intelligent, exciting novels about two wonderful characters, Elvis Cole and Joe Pike. I remember when the first volume came out as a paperback original in 1987, The Monkey’s Raincoat; everyone in the mystery world was gobsmacked, and the book was on all the major awards lists. He hasn’t stopped being a great writer, but now the characters are deeper. 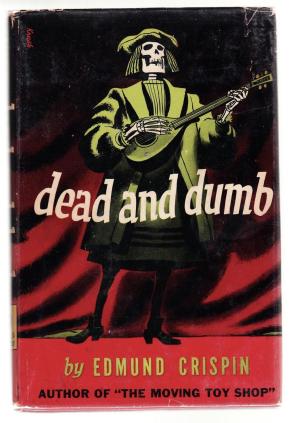 Sooner or later every mystery reader discovers the Gervase Fen novels and if you haven’t already, now is a good time. Crispin was unique. He was a master of the Farceur school of detective fiction, whose work has a constant mocking smile playing around the corners of its mouth as it says outrageous and unexpectedly funny things. Not out and out farce, mind you — classic whodunits, with Oxford don Gervase Fen investigating locked room mysteries and various other impossible crimes, but at the same time constantly keeping the reader off-balance and giggling. If you trace down every literary reference in every Fen novel, you’ll be a very, very well-read person and you’ll have had a great deal of fun being fooled by the novels. My favourite Crispin is Love Lies Bleeding, but the first novel, The Case of the Gilded Fly, is also a good place to start reading. A lot of Crispin’s reputation rests on the widely-beloved novel, The Moving Toyshop; for me, that emperor has no clothes, and I’d recommend almost any of the others first. Your mileage may of course vary.

Crofts is yet another focus of expertise for historian and analyst Curtis Evans, so I’ll recommend you to the same book, Masters of the Humdrum Mystery, as I did above — another third of the volume is about this author and his mastery of the Humdrum style. Freeman Wills Crofts came to prominence with the 1920 publication of The Cask, and was considered a major author of the Golden Age of Detection. Crofts is the master of the “alibi mystery”, especially with respect to railway journeys; his detectives are always questioning station attendants to find out if a disguised Mr. X could have taken the 3:16 from Little Puddleworth and arrived at the manor in time to kill Lady Pamela, although I just made that bit up. You get the idea. Inspector French always seems to be in charge of cases where the murderer is willing to go through an incredible rigamarole to make himself immune to suspicion, and he is what Julian Symons was talking about in Bloody Murder when he invented the term “Humdrum”. Inspector French solves cases by painstaking, exhaustive detective work; he makes sure that what people tell him is true, and his focus is on physical facts. The Cask is a bit dated these days, and it doesn’t feature French, but it’s a good place to start; the only novels that might disappoint you are ones from the late 1950s when Crofts’s confident writing and plotting had fallen off due to age. But he was very readable for 30 years and more than 30 volumes! 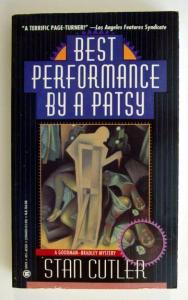 Occasionally I just want a light mystery with which to relax; something where I don’t have to try too hard to figure out the puzzle, because it’s pretty obvious, and instead I can focus on some interesting and charming characters and their humorous interactions. If you’re looking for something along those lines, try Stan Cutler’s four novels about the unlikely partnership of gay ghostwriter Mark Bradley and straight and old-fashioned PI Rayford Goodman solving L.A. crimes in the 90s. The writer has the pleasant habit of alternating POVs of the protagonist, chapter by chapter, and I think the stories are well handled and very readable. You see the same events from two different perspectives and that’s fun. If you start with Best Performance by a Patsy, you can read the four novels in order. Cutler seems to have moved on to a different style of mystery fiction, and I haven’t read any of it yet, but I would be prepared to pick them up; he has the knack of amusing me without being cloying or unlikely.