Really, I must apologize. I was completely determined to read my way through Gladys Mitchell’s enormous backlist of detective fiction (60-plus volumes). I had visions of a long series of posts in which I would discern Mitchell’s central themes, report back on her preoccupations, and present a picture of Mrs. Bradley (her series detective).

I have the electronic equivalent of a teetering To Be Read pile filled with her works, greater and lesser. I keep dipping into one and then another, hoping to find something that sets off a spark of interest. And you know, I’m sure it’s my failure as a human being, but I just can’t manage it.  I don’t like her writing style, I don’t like her characters. Most of her story hooks seem contrived and pedestrian; the mystery-oriented sections of her plots mostly don’t bear up under scrutiny. Half the books have something to do with boats and boating, and I am like Hercule Poirot, preferring to remain safely on shore. The stories are occasionally incoherent and I wake up a few minutes later, thinking, “Just who the hell is she talking to at this point?” Mrs. Bradley herself is mostly a collection of mannerisms wrapped in yellow skin; Mrs. Bradley’s hearty associate Laura Menzies is ghastly, like the girls’ school prefect from hell. I must have dipped into about 30 of them and put them all aside thinking, “Oh, lordy, maybe there’s a better one somewhere in the pile.” I haven’t found one.

And here let me specifically apologize to the erudite readers who paid me the courtesy of being interested in my opinions about Gladys Mitchell. Ladies and gentlemen, it’s clear that you like her writing more than I do, and I respect that; I don’t think you have poor taste, it’s pretty clear that I do. There’s something about Gladys Mitchell, or me, and the two of us are immiscible. I have decided to do you all the favour of not beating the topic to death in a vain attempt to keep my promise — it was mostly made to justify my acquisition of so many e-books at one fell swoop. 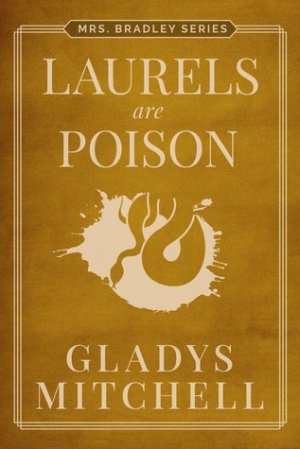 I will leaven this damning with some faint praise. There are a couple of titles that I liked; had this effort continued, I might have written about St. Peter’s Finger, Death at the Opera and Laurels are Poison with approval. The cores of these mystery novels are capably-constructed detective plots, which is something I pretty much require in a mystery, and while they are not superb, they are very well done.

There is at least one novel that will probably be an entry in my “100 Mysteries You Should Die Before You Read” series, the completely insane Sunset Over Soho.  It contains a paragraph that attempts to communicate that two characters are having sex which is one of the most unintentionally hilarious things I have ever seen in print; like someone describing how to participate in an activity that they’d never actually experienced but only been told about. 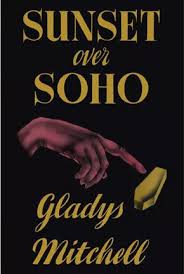 Mitchell, indeed, seems to have been more forthright about sexuality than most of her contemporaries; people have sex in or out of wedlock, which I expect would have shocked most of the Humdrums, and if they’re married they enjoy it. I have to praise her for being ahead of her contemporaries in this respect; the pure puzzle mystery is not known for sexual realism and she moved the sub-genre forward bravely.

Conversely, Mitchell was somewhat philosophical, with a bent to what we would today call the right — her views on eugenics are very abhorrent to today’s readers and were rather shocking to the contemporaneous ones, I suspect. Her unpleasant attitude towards a character with Down’s syndrome certainly shocked me. To her credit she doesn’t stop the action for two characters to have a discussion about her political views; she buries them, like she buries her observations on class and class structure, in the background and subtext. Lots of small moments added up to a picture of a writer who wouldn’t have dined at my table and remained philosophically unscathed.

But I think it’s better to leave off Gladys Mitchell; if I can’t do the research, I shouldn’t shoot my mouth off based on an incomplete reading. I admit that pile of unread e-books will bother me, but so would forcing myself to continue.

And so I shall return to something more to my taste, again with apologies to both Mitchell and her fans, who are many.  I do have a major piece on a Rex Stout novel about Nero Wolfe (And Be A Villain) coming up, in conjunction with my friend JJ whose GAD blog at The Invisible Event is constantly a pleasure. We’ll be doing a full-of-spoilers analysis, so be warned. (One day later, I’ve edited this for accuracy, see the comments below.) In the meantime, to clear my palate, I think I need something of the zero-characterization, all-puzzle style. Where’s that Rupert Penny novel I was looking at idly a few weeks back?