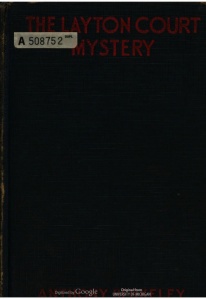 Anthony Berkeley Cox wrote under a number of names but Anthony Berkeley might be the best known; admittedly he wrote a couple of wonderful novels as Frances Iles, notably Malice Aforethought and Before the Fact, which was filmed by Alfred Hitchcock as Suspicion.  Indeed, he pretty much invented the “inverted mystery” as Frances Iles. As Anthony Berkeley, though, he chronicled the adventures of yet another Silly Ass detective named Roger Sheringham, whose first adventure this is.

This 1944 volume qualifies as a Golden Age mystery; fifth under “L”, “Read one country house mystery.” The titular house is the scene of the crime and almost all the action of this novel. For a chart outlining my progress, see the end of this post. 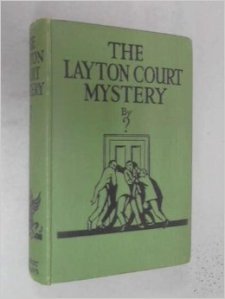 The publication history of this novel is quite interesting. Its first publication was as by ? — yes, Berkeley published two early novels as by a question mark. (Examine the green volume to the left carefully.) Perhaps this was some sort of publicity idea whose concept is beyond my understanding. Can you imagine how frustrating it must have been for librarians, who had to figure out how to shelve these? Anyway, it was next published in the U.S. in 1929 as by Anthony Berkeley, and it has remained thus ever since.

I found the publication history particularly interesting because it includes the edition from which I wrote this post: it was electronic and found here. My practice is to show the cover of the book I used, and it is at the head of this post; it’s also at the head of the page containing the novel. I have to say, this was my first on-line book. It was an interesting experience. I have an e-reader but have found that not much of a decent antiquity is available for reading in those formats; I expect that will change as the copyright freedom date creeps slowly forward.

Standard spoiler warning: What you are about to read WILL discuss in explicit terms the solution to this murder mystery. Please read no further if you wish to preserve your ignorance of its details. You will also probably find here discussions of the content of other murder mysteries, perhaps by other authors, and a similar warning should apply.

Roger Sheringham is your basic wealthy upper-class British nitwit who talks a great deal of piffle, as Maggie Smith once put it, and is staying at a country house when his host, wealthy Victor Stanhope, is found dead in the final sentences of chapter two, shot through the forehead in the library at his country house, Layton Court. And all the doors and windows are locked from the inside.

Victor is a bachelor whose widowed sister-in-law, Lady Stanhope, keeps house for him. He has a secretary, Major Jefferson, and a chauffeur who used to be a boxer. Other than the usual household full of servants, Victor enjoys a house full of guests, it seems. Lady Stanhope’s friend Mrs. Shannon has brought her daughter Barbara, and Mrs. Plant is a beautiful young woman whose husband is in the Soudanese Civil Service.  Barbara, as our story begins, becomes unaffianced to the handsome young athlete Alec Grierson, who has been asked to the house to keep Barbara entertained; Alec has brought his friend, aforementioned silly ass author Roger Sheringham.

In the pages that lead up to the discovery of the actual murderer on page 291, certainly there is a great deal of piffle proffered for the amusement of the reader. Alec quickly takes on the role of Watson to Sheringham’s Sherlock Holmes, a combination acknowledged specifically by both of them, and Sheringham soon begins to speak in great gusts of rolling sentences, almost like a detective stream of consciousness. He has ideas about everything, he pokes his nose into everything, and he soon begins to learn that very nearly nothing in the house is what it seemed upon the surface.

He is helped along in this by the police, who seem relatively uninterested in further investigation. After all, the man was found clutching the gun that killed him, with a kind of suicide note in front of him, and all the doors and windows of the room locked from the inside.

Of course, all the house’s inhabitants immediately start acting guilty as hell, one by one. One by one, so that each person can be interviewed in a chapter that provides a piece of information that takes us to the next chapter. There are occasional false starts and false trails. At one point, the principal characters spend a couple of chapters chasing down the lead of a name which, to everyone except the dim-witted detective and his even dimmer-witted assistant, it is obvious is that of an animal. We soon learn how to lock a certain kind of window from the outside so that it looks like it’s been locked from the inside, disposing of the locked-room problem. Suspicions shift from one house guest to the next, but each time something is learned that pretty much eliminates the individual from further consideration.

Finally, Roger Sheringham works out whodunnit. If you are anything like me, the identity of the murderer will have been screamingly, patently obvious from about page 100, but given the fact that the puzzle mystery was at the time in its complete infancy, the contemporaneous reader will have been gobsmacked to realize that his morally upright assistant, Alec, is the killer. The book ties off its loose ends and closes.

One thing it’s important to note at the outset is that this book was published in 1925. In 1925, to give you some context, Agatha Christie had published five novels and was probably working on The Murder of Roger Ackroyd for publication next year. Chesterton had only published two small volumes of Father Brown stories more than ten years previously. Philo Vance showed up a year later; Ellery Queen’s debut was four years in the future; Raymond Chandler’s debut novel was 14 years away. Movies were silent and the publishing industry was much more active, and considerably different, than it was today. And the Golden Age of mysteries was in its earliest period.

Specifically, John Dickson Carr was five years into the future and the locked room mystery was in its infancy — which is one of the reasons why this book is so interesting, because its clever author was making things up as he went along and yet influenced an entire genre. Yes, it was absolutely bold-facedly obvious that the assistant was the killer. But in 1925, before the publication of very nearly every single book that contained such a twist, this must have been astonishing and avant-garde and even thrilling. I expect that the Silly Ass narrator idea was also in its infancy and no one had yet done much with it — in fact everything here that is presently a boring cliche was fresh and new. Even the country house mystery hadn’t been done to death at this point.

The other main reason is that this is the first book by an author who went on to write some of the most important and influential puzzle mysteries in the history of the genre. This is by no means his best book, not even close, but you can see the bones of a major talent beginning to fill out with flesh. This book is filled with cleverness. Some of it doesn’t come off — the two chapters where the action grinds to a halt while the detectives track down a suspect who turns out to be an animal are excruciatingly awful — but the author is not copying anything, or riffing on anything, or providing variations on a theme. He’s inventing things that we think of as absolutely classical trophes of the genre. 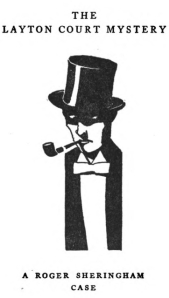 You will probably find this volume difficult to take seriously, because you have read its imitators so many times before. Ngaio Marsh lifted the idea of interviewing a subject per chapter for about 90 percent of her own books, and ground us all between millstones of boredom while doing so. The false solution then the true was not yet the basis of 90 percent of Ellery Queen’s activities. The locked room mystery was not yet the bailiwick of John Dickson Carr. And at this point in his career, Anthony Berkeley was not yet a polished writer. There’s certainly an artificial air of “jolly hockey sticks and a ha’penny’s worth of chocs a fortnight come Michaelmas” — a forced bonhomie coupled with a deep vein of Anglophilia — that is hard to plough through. Indeed, if this book had been written in 1935, it probably wouldn’t have seen publication. But in 1925, this is the bomb, and you should suspend your critical facilities long enough to slog through it. And you will thereby learn a lot about how mysteries work and where they come from.

The first edition (UK, Herbert Jenkins, 1925, as by ?) first printing is completely unavailable, it seems. One bookseller suggests that none has come to light in his 34 years of experience. The second printing is available VG, without jacket, for a maximum of $320. The American first, 1929, as by Anthony Berkeley, from Crime Club/Doubleday Doran, is in a similar range of prices. None of these firsts comes in jacket, but there are excellent reproductions available (two of which are shown in this post). Honestly, if I had a book like this without a jacket, I certainly wouldn’t mind having a repro jacket for it; it would add beauty, if not much value.

The contents of the book have apparently now fallen into the public domain since it is available on line from a library as a PDF file here. It is also available in various print on demand formats available over the internet, including Kindle. 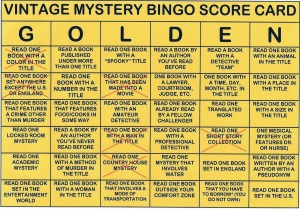