Note: This book was originally published as by “Anna Apostolou”; the author whose work it is has many pseudonyms but is generally known as either Paul Doherty or P. C. Doherty. It is now published as an e-book under Paul Doherty.

Please be warned that this essay concerns a work of detective fiction; part of its potential enjoyment is based on surprising the reader. If you read any further, you will learn something about the titular novel and perhaps some others. I do not reveal whodunit, but I do discuss elements of plot and construction and come quite close to giving away a central secret. If you haven’t already read this novel, it will have lost its power to surprise you to greater or lesser extent, and that would be a shame. So please go and read this book before you spoil your own enjoyment. If you proceed past this point, you’re on your own. 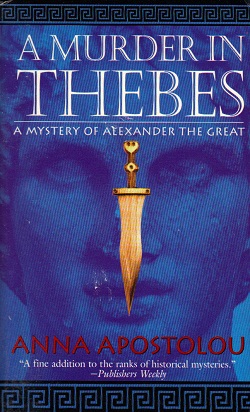 I’m never quite sure how to feel about authors with a huge output of published writing. I’ve had bad experiences with Gladys Mitchell just lately — similarly Edgar Wallace, Elizabeth Linington, and John Creasey. Simenon leaves me relatively cold, although his skill is evident. But Erle Stanley Gardner, John Dickson Carr, and Agatha Christie are always interesting to me. It’s too simplistic to say that if an author produces a huge number of volumes they must automatically be a hasty and poor writer. It does sometimes make me approach a prolific writer with caution, though.

And that’s the frame of mind I brought to the work of Paul Doherty, who has written, by Wikipedia’s last count, more than 100 mysteries; I believe all or nearly all of them can be categorized as “historical”. I read a few of his earliest books back in the 80s, but have forgotten very nearly everything about them; at that point in time I was already surfeited with Ellis Peters’s adventures of Brother Cadfael (yes, you read that right, I’m not a fan; I think they’re ersatz and bland) and didn’t feel I needed more mediaeval hijinks in my life.  When you couple that with the idea that I only occasionally read anything written after I was born, you can understand why I’ve only experienced about 5% of his output, if that.

But then I discovered that, as Anna Apostolou, Doherty had written a couple of mysteries featuring Alexander the Great. Now, I’ve always had a huge interest in Alexander the Great; I’ve read a bunch of books about him, sparked off by the excellent novels of Mary Renault, and will always pick up anything about him, fiction or non-fiction. When I happened across a copy of #2 in the series, A Murder in Thebes, I thought, what the heck? How bad can it be?

I say this because my pessimism for once had no payoff.  I found, to my pleasure, that while this is not a novel for the ages, it’s very competent and smartly done, and Doherty (whom Wikipedia tells me is an expert on Alexander the Great in his own right) has hit most of the right notes along the way.

The story is actually about sister-and-brother Israelite detectives Miriam and Simeon Bartimaeus; they are fictitious and the conceit is that they were sent to be educated by Aristotle along with Alexander. Miriam is an intellectual with a “determined mouth” who acts as a kind of … well, let’s say “private eye” for Alexander, who apparently keeps running into locked-room murders unknown to history.  Some other characters are actual historical figures in the correct time and place as we know from history; the events in this novel and most of its characters are imaginary, though. 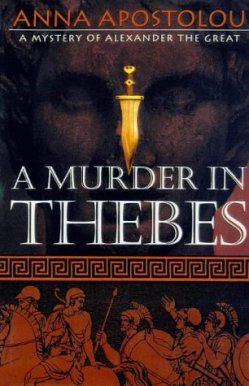 I suppose you can’t write 100 mysteries without having, if not a formula, then at least a pattern.  This one was easy to see, and the book is well-constructed.  The A plot is the murder case that involves someone killing Alexander’s officers during the siege of Thebes (and after Alexander takes the city); apparently there’s a spy among them in the pay of Persia, known as the Oracle.  Most of the book is devoted to the identification and unmasking of the spy/murderer and, honestly, since I spotted the central clue pretty much within seconds of its transmission, the problem didn’t occupy my mind much. (I will merely say I’ve owned dogs; I got the right answer for mostly the wrong reasons, so that little clue will mislead you.)

The B plot is involved with “The Iron Crown of Oedipus”, a sacred relic of Thebes in its own shrine with attendant priestesses.  The crown itself is fixed to a post, and the post is surrounded by pits of fire, pits of poisonous snakes, and pits of spears. In fact, it’s an “impossible crime” situation; the chief priestess knows how the crown can be removed (without the use of tools, which are blasphemous and sacrilegious in the context) but nobody else is aware.  When the crown vanishes, just before Alexander needs to wear it publicly to confirm his acquisition of Thebes by Macedon, Miriam has to figure out who took it and how.

The reader will not be surprised by this puzzle either, if s/he ‘s paying attention; there are a couple of very broad hints that seem a little anachronistic and thus obvious even to a reader of limited experience with detective fiction.  I’ll accept that Doherty is a historian and thus I’ll suspend my disbelief about what he says was a common toy among Theban children and Macedonian soldiers. But honestly, it might just as well have had a neon arrow in the text saying, “Big ol’ clue right here.” There was just no reason to include its repetitive mention otherwise.

I actually think the reader is supposed to grasp the central premise of what’s going on; it’s an interesting idea, that the author should build in opportunities to make the reader feel better about his/her intellectual gifts.  After you put two and two together — well, okay, I’d figured out the killer and I’d figured out the puzzle, and I felt very clever for a moment. It’s not an experience I often have with detective fiction, and it would have been very unusual to have it with, say, Christie, Carr, or even Gardner upon my first reading of their works way back when. I suspect I might be able to solve other volumes in this series, and others of Doherty’s many series, without too much strain, and while that seems superficially an attractive prospect it does rather pall when I contemplate the great books which have so cleverly pulled the wool over my eyes and provided me with more pleasure by fooling me.  Your mileage may definitely vary, and I know Doherty has a lot of adherents, so perhaps I’m extrapolating far too much from a single example. 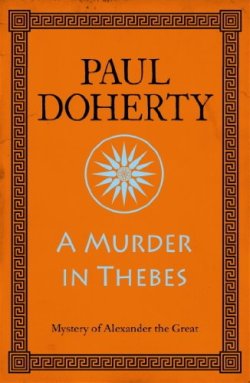 I’m not sure why Doherty inserted the distancing mechanism of having the central characters as Israelites … for me it doesn’t work as well as merely having a Macedonian do the job. I suspect it has something to do with offering the reader a female character with whom to identify and having her not be, as one might say, overly troubled with sexual activity. Miriam protects children and the innocent and wields great power as a favourite of Alexander, and reacts angrily for the most part when she is sexually harassed.  I just find it hard to accept that a female from what today is called Israel would be in that position; it strains my suspension of disbelief somewhat.

The part that Doherty really has nailed on the head is the character and situation of Alexander. I’ll be blunt and say that I was expecting Alexander to have been de-gayed for the lowest common denominator of reader; not so, and full marks for having Hephaestion described as Alexander’s companion and lover, and kissed once in a while to boot.  Indeed, the everyday socialization of what we would think of today as “kinks” is a part of the narrative, and not in a sniggering or heteronormative way either; it’s part of everyday Macedonian life and this murder too, since many of the male characters have male partners and casual lovers, and cross-dressing is an accepted idea that bears upon the plot without being meretriciously paraded.

Similarly, this is not your average cozy, in the sense that as the book begins, Alexander breaks the siege of Thebes and captures the city, killing many of its inhabitants and enslaving the remainder. We’re not spared the stacks of dead bodies and the terrible smell and floating ash of their funeral pyres; there’s also a rough-and-ready cure for diarrhea offered by Alexander. The punishment for just about everything is death. The characters lead lives, at that everyday level, that seem appropriate for the time and place without any sops to 21st century morality.  (Neither do any characters decry the backwardness of their own existence, thank goodness.)

All things considered, I enjoyed this. It’s a nice easy mystery story based firmly and accurately in historical knowledge — and you don’t “walk out humming the research,” as occasionally happens with other historical mystery writers. The characters are simply drawn and pleasant to contemplate and there is the “impossible crime” aspect, although not much of a one to be honest.

Would I go out and get more of these? I hope to track down the remainder of the Alexander series, certainly, but I would have done that anyway just to see how the rest stack up. I think I’ll spare myself his mediaeval mysteries for the moment; while I’m sure it would be delightful to have a further hundred books to add to my To Be Read list, I just can’t face all that mediaevality (with the disembodied face of Derek Jacobi floating in my mind, exclaiming pompously, “But this is positively mediaeval!”). It is, however, a sharp lesson to me not to be so fast to assume that because a writer is fast, his quality suffers. This is a well-written book with good characterization and an excellent balancing of the plot structure and I’ve read a lot worse — a LOT worse — in the cozy genre.