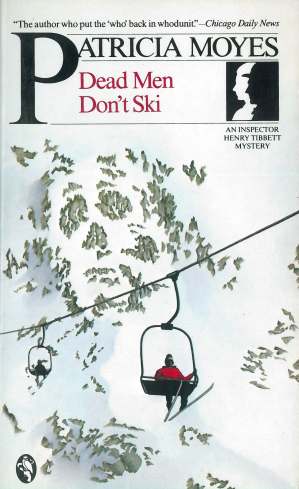 Dead Men Don’t Ski is the first in a series of mystery novels about Inspector Henry Tibbett whose wife Emmy plays an important role in the detection and the plot. This book, and others by the same author, seem to me to bridge the gap between the strict-form puzzle mystery and the modern cozy mystery. Dead Men Don’t Ski is actually a timetable mystery a la Freeman Wills Crofts, but bundled with a great deal of excellent characterization and a charming writing style.

Please be warned that this essay concerns a work of detective fiction; part of its potential enjoyment is based on surprising the reader. If you read any further, you will learn something about the titular novel and perhaps some others. I do not reveal whodunit, but I do discuss elements of plot and construction. If you haven’t already read this novel, it will have lost its power to surprise you to greater or lesser extent, and that would be a shame. So please go and read this book before you spoil your own enjoyment. If you proceed past this point, you’re on your own.

What is this novel about?

Scotland Yard Inspector Henry Tibbett takes his wife Emmy on vacation in the Italian Alps, where both hope to improve their skiing. They meet an engaging cast of characters, many of whom are vacationing English skiers, and some of whom are locals in the picturesque little town. Very soon we learn of the mysterious death of a local ski instructor in the previous year, and the possibility of there being some sort of international smuggling operation based around a mysterious gentleman who comes to the local hotel every year. The reader will not be surprised to learn that one of the hotel guests is soon discovered dead at the bottom of the mountain on the ski lift, although he was apparently alive when he embarked from the top.

Inspector Tibbett seems ready to abandon his vacation in order to investigate any and all of the circumstances surrounding the death on the ski lift, including a second related murder, and in the process resolves the smuggling issues, a couple of serious problems with various marriages, and last year’s corpse on the ski hill.

Why is this novel worth your time?

This is a very well written debut novel from a writer who went on to a very strong career writing light, charming murder mysteries. It may well be that Moyes’s work was overlooked in her lifetime precisely because she chose the mode of light entertainment, but her career came at an interesting time in the history of detective fiction.

I remembered reading this novel many years ago (and all the other books in the series, because I’m that guy LOL) and upon reacquainting myself was surprised to learn that, at its core, this really is a classic timetable mystery. A timetable mystery, cherished by aficionados of Freeman Wills Crofts and others of the Humdrum school, is one where you have to follow along and figure out exactly where everyone was at every moment of a crucial period — someone is lying and this has generated an impossible crime.

Chapter 17, for instance, contains an extensive written timetable generated by the local police that goes for hours: here’s a snippet.

And so on. The idea is that you should be able to identify where the police have gone wrong before Inspector Tibbett, although it’s unlikely.

In the hands of a Freeman Wills Crofts, of course, this sort of plot line is a paean to the dogged determination of large numbers of faceless police officers under the direction of Inspector French, who interview everyone in the vicinity to make sure that (a) it actually WAS 1:59 when those three people left the Olympia Hotel, and (b) they were the people whom they were believed to be, and not someone impersonating them. Et cetera. In the wrong hands it can be tedious, and Crofts was not known for leavening this grinding down of alibis with much human interest.

Here, though, Moyes gives us full value in terms of characterization. All the characters are interesting on the surface and interesting in depth; they have a certain degree of realism and, frankly, the reader is enticed to speculate what it would be like to spend a holiday among these people having a good time on the slopes. This writer creates vivacious characters doing interesting things against a background of normal behaviour; everyone is polite and intelligent and nice, by and large. and the whole experience is a very pleasant one. The assessment of the timetable’s details is not a Croftsian grind, but rather the reader gets to know these interesting people a little bitter and figures out exactly why they may have lied about buying ski wax or a paperback novel at 2:48. It’s not always guilt; often, merely veniality.

Indeed Moyes surmounts a number of the problems that plague first authors and does so with skill and intelligence. There is just enough plot to keep the reader interested throughout; the smuggling and the village history and the murders all have skeins of plot that must be untwisted from the others. (A common first-novel issue is too much plotting — too many twists, which keeps the reader interested but is ruinous to believability. Not here.) The characterization is excellent. There are a couple of false notes; I was unable to believe in the Baron, for instance, especially his final actions within the novel, and the Baroness is not particularly realistic either (if she had really wanted to have an affair, she could have done a much better job of covering her tracks). But it’s clear that Moyes has been skiing in the Italian Alps and knows the types of people who make their living in that milieu, and also she has a keen eye for observing the types of people who take those skiing vacations.

Although the time period is not as far away and difficult to understand as might be the details of everyday life in, say, 1921, there are still elements of the social fabric that will pique your attention. I wasn’t aware that currency restrictions were still in place in 1959 for British citizens traveling abroad; as I understand it, Britain was worried about its balance of payments and insisted that its citizens would not be allowed to take large sums of money out of the country and spend them. This adds interest to the plot when we realize that although you might have lots of money available in England, if you want to buy an expensive Italian sweater with the cash in your pocket, it affects the rest of your holiday. So there’s lots of opportunity for petty criminality in circumventing the currency regulations.  Similarly there is a smuggling sub-plot and for once it is reasonably realistic in its scale and economics.

I think this novel, and Moyes’s entire oeuvre, is also interesting in terms of when it was written, and how it fits into the overall flow of detective fiction. In 1959, the classic puzzle mystery was pretty much not being written at all. The readers of the time had access to material that was much more exciting — it was the time of Ross Macdonald and long-dead secrets from the past that come bubbling to the surface, not lighthearted mysteries where everything turns out happily. Women writers like Dorothy Salisbury Davis and Charity Blackstock and Charlotte Armstrong and Margaret Millar were writing novels of domestic suspense and the “light mystery” was rather a thing of the past.

I don’t suggest that Moyes got a lot of critical attention for bucking the trend; perhaps she was considered to be turning out merely commercial fiction, but she seems to have been alone and mostly on her own, working away in a niche that no one else seems to have wanted to occupy. She wrote with intelligence and skill, and that evanescent quality that is so hard to attain, charm — and seems not to have been interested in domestic suspense. Is it fair to say she was an early precursor of the modern cozy? Maybe, and maybe not. Certainly the focus on characterization might lead us to think so, but the rather antique form of the timetable mystery is too strict and rigorous for most cozies.

I do recommend this novel, and all her earlier works. In Moyes’s later years she moved to the British Virgin Islands and set many of her books there, and they seem to me to be much less interesting. When you consider that Moyes was Peter Ustinov’s personal assistant for eight years, and also worked at British Vogue, that’s the vein of material that seems to provide the most interesting novels — she’s good at writing about fashion and leisure and the arts. I remember being particularly impressed by Murder a la Mode (1963) and Johnny Under Ground (1965); your mileage may vary.

A note on editions

Patricia Moyes has been frequently in print in the years between 1959 and now; you’ll easily find an inexpensive paperback copy of many of her early works. Rue Morgue, for instance, brought out a trade paperback edition of this title in 2011. I note that a Fine copy in a Fine jacket of the first edition that’s personally inscribed to friends of the author is on sale today for US$450, and that seems about right for her first book. My favourite edition is an early Ballantine paperback seen here, with the skull wearing sunglasses in a red knitted ski helmet. Delightfully lurid and yet not too gruesome.