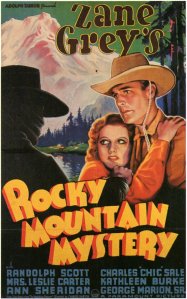 Author: An adaptation by Ethel Doherty of an unpublished novel (Golden Dreams) by Zane Grey. Screenplay by Edward E. Paramore Jr. Ms. Doherty’s writing career went back to 1925 and this was, in fact, her last screen credit. Mr. Paramore wrote a long list of films including perhaps his most famous, The Bitter Tea of General Yen. And Zane Gray, of course, was a best-selling and extremely prolific writer of Westerns who became an overnight success in 1912, with “Riders of the Purple Sage”. He has 116 writing credits in IMDB alone, his own TV series (Dick Powell’s Zane Grey Theatre from 1956-1961) and a long, long list of published books — which makes me wonder, just what on earth is he doing with an unpublished novel? However, this story appears to have been updated to 1935, regardless of when it was first written, and this seems to have been the work of Mr. Paramore. No source suggests that Zane Grey had anything to do with this film personally.

The unpublished novel Golden Dreams was filmed under that title in 1922 of the silent era; IMDB says nothing about it beyond the cast, but merely by the characters’ names I can tell that it has little or nothing to do with this plot about a radium mine. At least, it seems to be vaguely about Spanish aristocrats in early California.

Other Data:  63 minutes long. March 1, 1935, according to IMDB.  Directed by Charles Barton, who won an Academy Award for best assistant director in 1933 — no, I didn’t know there was such a thing either — and started his directing career in 1934 with a different Randolph Scott/Zane Grey feature, Wagon Wheels. His career included The Shaggy Dog, for Walt Disney, and 106 episodes of the execrable Family Affair on CBS, 1967 to 1971.

All extant prints that I’ve seen bear the title The Fighting Westerner. There is no reason cited for this title change that I can find; frequently it has something to do with the sale of the film to a television packaging company in the 1950s, such as Favorite Films, here cited above the title with a credit to Paramount, whose original production this was. I suppose they mean that the hero is a fighting Westerner but really he’s more of a detective than a fist fighter.

It seems odd to me but, omitting a few supporting players near the end, this is the order in which the credits were run. If so, Chic Sale had a much larger following than I’d thought. His Wikipedia entry here makes fascinating reading; at one point around this time referring in conversation to his name meant that you were making a euphemism for an outhouse, and there’s actually a reference to him in the Marx Brothers’ film Animal Crackers. He specialized in “backwater hicks”; in this film he’s mainly the comedy relief.

Mrs. Leslie Carter also had a more interesting career than I’d ever heard of, a précis of which is found here. Frankly, she sounds like a character from the musical Chicago — she used her married name to spite her husband — and they made a movie about her in 1940, The Lady with Red Hair. This is one of her few film appearances and OMG, does she ever look like a drag queen, with a huge jaw, unplucked furry eyebrows, and a deep serious voice. Ann Sheridan of course went on to become the “Oomph Girl” and made The Glass Key the same year; and about a dozen other films, all in 1935. They worked ’em HARD in those days. Even the barely-seen Willie Fung has an interesting biography and resume. All things considered, this would have been a high-powered cast without Randolph Scott, but with him, it’s quite a bit above the usual level of the Westerns of the period.

And of course Randolph Scott is a well-known Western hero who was just getting his career off the ground in 1935 — this film is cited as a turning point for his promotion from B films to the A level. Between 1932 and 1935, he made ten Zane Grey westerns in a loose series for Paramount and this seems to be the last.

Spoiler warning: I must announce at this point that the concepts I wanted to discuss about this film cannot be explored without revealing the ending of the film, and the twist that underlies some events.  If you have not yet seen this film and wish your knowledge of it to remain blissfully undisturbed, stop reading now and accept my apologies.  If you read beyond this point, you’re on your own. 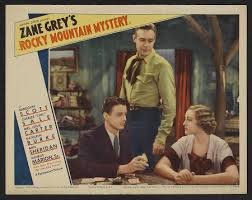 I originally decided to investigate this film for a peculiar reason. I mentioned idly elsewhere in this blog that “I can suggest there are a couple of Western series characters whose films were primarily mysteries with Western trappings and characters, albeit at the general level of mystery of Scooby-Doo and those meddling kids.” Of course, when I sat down and tried to think of some, well — I had had the vague idea that what I think of as the “Radio Ranch” genre of movie cowboy series frequently dipped into the standard mystery plot structure as a basis for their activities. For instance, Riders of the Whistling Skull from 1937, featuring The Three Mesquiteers, qualifies as a “weird western” and has both a murder mystery element and a mummy. But I do remember one plot structure that recurred over and over. The kindly old owner of Ranch A was found dead and it shore did look like the owner of Ranch B made good on his threats. Luckily the lovely orphaned daughter of the victim managed to attract the attention of a gallant Western hero, who solved the crime, shot or arrested the perpetrator and kissed the girl. (My recollections here are based on a misspent youth in front of the television in the 60s.)  I may still find some of these; however, I got sidetracked when I found Rocky Mountain Mystery.

To me, this is a fairly standard Western, but I gather from my reading that there are significantly different elements. To begin with, this all takes place against the background of a radium mine — radium being worth an enormous amount per gram in 1935 — and there is barely a horse to be seen, but quite a few automobiles and telephones. We begin as Randolph Scott (playing “Larry Sutton”) arrives at the Ballard radium mine to take over as chief engineer (not ranch foreman, as is more usual) because his brother-in-law has disappeared after the death of the ranch caretaker, Mr. Borg. Randolph Scott teams up with deputy sheriff Tex, the comedy relief, to investigate Borg’s death — gruesomely, crushed in a gigantic piece of mining equipment used to crush rock. Elderly paterfamilias Jim Ballard is bedridden, and his niece Flora and nephew Fritz have arrived to secure their inheritance from his radium mine and accompanying ranch. (His other niece Rita (Ann Sheridan) has also arrived, but she’s only there to provide a love interest for Randolph Scott.) Borg’s widow Mrs. Borg and her scrawny son John, and “mysterious Chinaman” Ling Yat, keep the household running.

After Randolph Scott arrives, things heat up. Soon Fritz is found crushed in the same piece of equipment, and a dark cloaked figure runs around and stirs things up; but everyone seems to have an alibi.  Next John Borg is shot, Randolph Scott is attacked by the cloaked figure, and Flora is murdered by having her throat cut. All these events take a toll on the invalid, it seems. Randolph contacts his ex-wife, who hasn’t been out at the ranch in 30 years, and tells her to come quickly to say good-bye.  When she does, she reveals that the invalid isn’t her ex-husband at all, but Mr. Borg — who crushed the ranch’s owner into unrecognizability and took his place. In an exciting finish, the Borg family and Ling Yat run for the hills, and a number of chase scenes result in the Borgs and Ling Yat being sentenced to 20 years in prison, Tex becoming the sheriff, and Randolph Scott marrying Ann Sheridan and buying a ranch in Hawaii.

Indeed, this is a strict-form puzzle mystery, as I have elsewhere defined it. The film is careful to show us people at the precise moment in time when things happen — for instance, when Flora screams her final scream, we see Randolph Scott amid three or four other suspects, all of whom look up. Everyone is carefully alibied except the invalid, who clearly must be guilty. If you get that far, it’s easy to figure out that the central clue is that someone spirited away the dead body that had been identified as Mr. Borg, and thus the murderer has changed places with his victim.

This did hold my attention. Every once in a while it veers into the cliche-ridden B-movie Western, notably with the “by cracky” antics of  Chic Sale — and yet we see him taking the hoof prints of horses to identify the one ridden by the murderer, which is hardly silly at all. Similarly the black-cloaked villain seems to be a hangover from the fast and dirty days of the B movie, but this movie, with a cheerfully uncaring attitude towards any possible disbelief, offers us all kinds of cliches with an air of not knowing that they are indeed cliches. So we have the swarthy suspicious Chinese servant and the brooding housekeeper and her weird, weakling son. We’ve seen everything here before, more or less, and if the director is not ashamed to include it, I’m not ashamed to enjoy it.

It’s interesting to see how the film changes with the introduction of cars, automobiles and radium; as if there has been some sort of time warp that leaves half the script in the 1890s and the other half in 1935. I imagine they must have had rudimentary identification in 1935 and that it would have been a lot easier to take over someone’s identity in 1895. Similarly, villainous Chinese servants were all the rage in 1900 or so, but rather old hat in 1935, what with the introduction of Charlie Chan and all.

And it’s rather fun to watch this weird crossover between mystery and Western. The director is apparently convinced that there are no problems inherent in fulfilling the requirements of each genre, and he seems to be right. (If you’re interested in seeing how cross-genre Westerns can occasionally fail spectacularly, check out The Terror of Tiny Town some day.) The merging of mystery and Western is quite good here; enough detective work to satisfy the crime fan, and enough Western action for Western devotees. I have to say that the final solution is precipitated by the arrival of the long-lost ex-wife, and it’s not clear that Randolph Scott has invited her to attend with any detective motivation in mind; so the solution is kind of accidental, I think. Not as strict-form a mystery as the purists among us would like, but fun nevertheless.

This film is apparently in the public domain and can be found here.