Alibi For Murder (1936), produced by Columbia Pictures, directed by D. Ross Lederman, starring William Gargan and Marguerite Churchill, with Gene Morgan, Wade Boteler, Dwight Frye, and John Gallaudet. Written by Tom Van Dycke. Approximately 61 minutes (depending upon the print you see). Originally released September 23, 1936. Note that its working title was apparently Two Minute Alibi but I don’t believe the movie was ever released under that title.

Briefly: This film is not all that interesting, but it does have one feature that may be of interest to my readers; it attempts to bring an “impossible crime” to the screen.

Please be warned that this essay concerns a work of detective fiction; part of its potential enjoyment is based on surprising the reader. If you read any further, you will learn something about the titular film and perhaps some others. I do not reveal whodunit, but I do discuss elements of plot and construction, including revealing the secret of the “impossible crime” shown here. If you haven’t already seen this film, it will have lost its power to surprise you to greater or lesser extent, and that would be a shame. So please go and watch this movie before you spoil your own enjoyment. If you proceed past this point, you’re on your own.

What’s this movie about?

William Gargan plays an intrepid radio reporter, Perry Travis, who is trying to get an interview with a reclusive Nobel Prize-winning scientist, John J. Foster, as he disembarks from the Hindenburg in New Jersey. Perry’s comedy-relief assistant Brainy Barker (Gene Morgan) assists him in his quest. The scientist’s beautiful secretary Lois (Marguerite Churchill) misdirects him as to Foster’s whereabouts, but Perry reads a luggage label and learns that the scientist has gone to his Long Island home. He speeds out there and bluffs his way into the front hall, but as he’s trying to get past the household to interview the scientist, a shot rings out and Dr. Foster is found dead in his library. The library door is under observation and yet no one is in the room.

Scene in the “murder room” from Alibi for Murder, 1936

Perry reveals the murder as a scoop on the air, and he reveals (for no very good reasons) that he thinks it’s murder. There are plenty of suspects, including Foster’s wife Norma (Drue Leyton), his business manager E. J. Easton (Romaine Callender), and Mr. McBride (Dwight Frye). McBride is Foster’s assistant but his function is to be overwrought, to cast aspersions on the rest of the household and Foster’s business associates, and to reveal that the victim was not the selfless scientist everyone thought. He’s also seen very, very briefly in the victim’s office just before the household breaks in (and gets to say the classic line, “But he was dead when I got here!”).

There’s also a large subplot concerning Foster’s discoveries as they apply to munitions. All sorts of people are after Foster’s latest discovery, which has some important but unstated use in war-related chemicals. Sir Conrad Stava (Egon Brecher) (whom Lois has seen going through Foster’s desk) comes to visit Perry and Brainy and then some shots are fired through Perry’s office window. Perry finds a listening device in his office; everyone’s trying to find out how close he is to learning Foster’s final secret.

Skippy (aka Asta) the wire-haired terrier

When Perry heads out to Long Island, he’s just in time to rescue the butler, Lois, and Easton from a garage that is rapidly filling with deadly gas. (He’s assisted in this rescue by an uncredited dog I believe to be Skippy, the wire-haired terrier who played Asta in the first four Thin Man movies.) Later that night the detectives figure out that because of a ventilator in the garage roof, the gas victims were never in any real danger … A couple of thugs (Norman Willis and Edward McWade) promise violence to Perry and Brainy, but Perry manages to get them taken into custody by enlisting a traffic cop.

Perry convinces Lois to gather all the suspects in the victim’s library and demonstrates how the victim was killed. (Foster was killed with a silenced gun and the murderer planted a bullet cartridge in the fireplace that exploded when the room was empty.) Then Perry reveals that the killer was about to run away with Foster’s wife … the murderer then tries to escape, shoots it out with police, and dies in the process.  Perry broadcasts his latest scoop and, in the traditional romantic ending, announces that he plans to marry Lois.

Is this a good mystery movie?

You know, it’s not too bad. There are a couple of sophisticated mystery elements in this movie that are a bit above the regular run of B-movies … principally the idea that some of the suspects may have looked like they were in danger in the gas-filled garage but the detectives realize they never really were. And, of course, that the murderer plants a cartridge in the fireplace that goes off after he’s left the room. In B-movie terms, that’s quite an intellectual stretch for this film; it’s carried through properly by having Perry be seen to pick up a cartridge case by the fireplace, early in the film, and justify its presence in the blow-off finale.

Of course, there are the usual plot holes — it’s hard to tell a fast-moving story like this in a mere 61 minutes without them. But there are actually some moments of genuine deduction; for instance, around the use of a silencer. And the detective tests a hypothesis by investigating the gas-filled garage.

Who’s in this movie and in what other mysteries have I seen them?

Links to the names of individuals are to their IMDb listings.

It is somewhat distressing that most people who see this review and the movie will really only recognize Skippy the wire-haired terrier, who appears for about sixty seconds over two shots.

A possible second-most-recognizable would be character actor Dwight Frye, who plays a small but pivotal role here — he played Renfield in Dracula (1931) and Wilmer, the gunsel, in The Maltese Falcon (1931). In terms of other period mysteries, he’s also in The Circus Queen Murder and Who Killed Gail Preston?, both of which are worth your time, and played small, often uncredited roles in a host of other A and B movies. 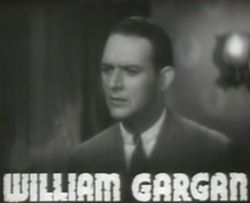 William Gargan (not from this film)

William Gargan should be more familiar to mystery movie fans than he actually is — he did a good job playing Ellery Queen in three B movies in 1942, and the title character in television’s 1949-1951 TV series Martin Kane, Private Eye and the sequel 1957 series, The New Adventures of Martin Kane. He’s also in 1946’s Murder in the Music Hall, 1945’s Midnight Manhunt and 1942’s Who Done It? All these films would qualify for inclusion in my analysis of mystery movies and you may see me talk about them here some day.

Marguerite Churchill‘s film career seemed to sputter to a halt in 1936, three years after her marriage to actor George O’Brien — I’m not sure why. She has striking features and a great figure, and given the material, she’s quite a competent actor. Before this film, she has some excellent mystery movie credentials — she plays Sally Keating in 1936’s Murder by an Aristocrat and appears in Charlie Chan Carries On (1931). I’ve talked about the “Sally Keating” character in my discussion of another early mystery movie from 1935, While The Patient Slept. Churchill is also in 1936’s The Walking Dead (a Karloff horror movie) and Dracula’s Daughter the same year, where she is seduced into vampirism by Gloria Holden.

Gene Morgan (not from this film)

Gene Morgan has a lot of uncredited roles as second banana, or worse, dating back to the silent days.  He too was in Who Killed Gail Preston? (1938), Murder in Greenwich Village (1937), and 1936’s Meet Nero Wolfe (as officer O’Grady). He’s also the lead in a piece de merde from 1932 called Tangled Destinies which is a mystery I hope to look at for you some day. 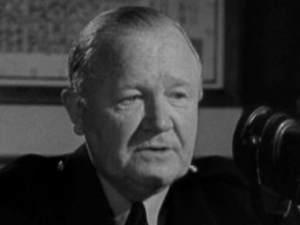 Wade Boteler doesn’t have much of a role here but you can see him in an Old Dark House classic I discussed some time ago, The Hidden Hand (1942), and lots of other uncredited appearances in mysteries like 1942’s Blue, White and Perfect and 1941’s Footsteps in the Dark. He’s definitely from the B-movie end of the spectrum but he did play Inspector Queen in 1936’s The Mandarin Mystery and Lt. Macy in Charlie Chan At The Circus (1936), and a sheriff in 1936’s The President’s Mystery. Once you get a good look at his face, you’ll recognize him in a lot of old movies, usually as a gruff cop.

The director, D. Ross Lederman, was primarily a B-movie director of westerns and action movies, but he has a good few mysteries in his resume; 1936’s The Final Hour and Panic on the Air, for instance, and 1934’s The Crime of Helen Stanley. My fellow members of the excellent Facebook group Golden Age Detection will remember a reference within the last few days to my fellow GAD blogger Jamie Bernthal-Hooker’s analysis of Murder on the Second Floor by Frank Vosper; Lederman directed one of the two filmed versions of this novel, 1941’s Shadows on the Stairs. 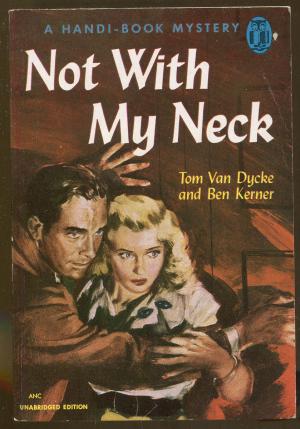 And finally, the screenwriter, Tom Van Dycke, appears to have had not very much of a career in mystery novels or films.  His novel, Murder at Monte Carlo, was made into a movie of the same name from 1935, starring Errol Flynn — no, not Charlie Chan at Monte Carlo, that was quite a different story and 1937 to boot. ABE doesn’t offer a copy of this book but there are a number of copies of another mystery by him — Not With My Neck (1947), which was a fairly lurid paperback from Handi-Book in 1948.

How can I see this movie myself?

I’ve been told this movie is in the public domain — I’m never sure about these things, so confirm for yourself. I bought a copy over the internet years ago for $5. These days if you want to get a copy you can do so via Amazon. Experienced film buyers will know that the usual range of crazy prices (here from about $20 to over $100) is meant for the unwary and you can probably find a copy at a much lower price if you look around.

I don’t remember ever seeing this film on television; I would start by looking at TCM and similar old-movie services to see if they offer it.