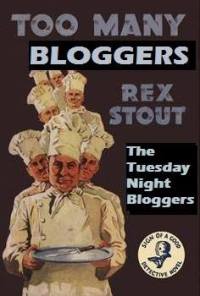 A group of related bloggers who work in the general area of Golden Age Mysteries has decided to collaborate and publish a blog post every Tuesday as the Tuesday Night Bloggers. We began in the spirit of celebrating Agatha Christie’s 125th birthday anniversary. We’ve now going to continue with a different Golden Age mystery writer every month; Tuesdays in January will be devoted to Rex Stout.

A lot of my fellow bloggers will be focused on the exploits of Nero Wolfe, and deservedly so. Nero Wolfe is one of the greatest literary creations of the 20th century; the books are original, intelligent, emotionally resonant, and have that strange quirkiness that seems to convince everyone who reads them that there actually is a brownstone on West 35th and Wolfe is at this moment yelling at Archie about the germination cards.  I love the Nero Wolfe stories, all of them, and I expect to talk about at least one of them this month.  But Rex Stout wrote for many, many years, and produced some very interesting work before he settled into the corpus exclusively. There is a lot of merit (and some silliness) in these stories and you may want to experience them for yourself.  Here are some of the high spots.

Let’s start with the very best. If, perish forbid, Stout had never thought of Nero Wolfe, we might today be discussing the merits of about 35 volumes of the exploits of Dol Bonner, and the entire course of detective fiction would have been changed.  The idea of a female private investigator, or investigator in any sense, was flirted with occasionally by perhaps a double handful of early writers, but no single character really caught the public’s attention (despite a strong showing from Erle Stanley Gardner’s Bertha Cool) until Marcia Muller’s first Sharon McCone novel transformed the genre in 1977.  (It’s called Edwin of the Iron Shoes, and it’s worth your time; remember, she was inventing what a later generation of writers took for granted.) 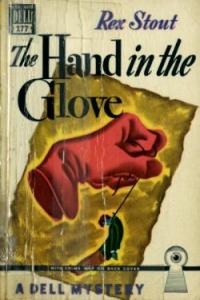 Rex Stout almost managed it, though. To this day I’m not sure just why Theodolinda “Dol” Bonner, running her own private investigation agency, didn’t catch on. To me, this novel is catchy and clever, and manages to balance strongly logical ratiocinative thinking with some powerful emotional work. It is literally a country house mystery; wealthy P. L. Storrs is surrounded by his family, his associates, and his neighbours at his country estate, Birchhaven, when he is found strangled by being hung from a

tree with wire. This is the same thing that’s been happening at a neighbour’s game farm with pheasants and small animals, but Storrs’ death starts a furore that embroils everyone for miles and results in another death before Dol identifies the killer and threatens to shoot that person in the kneecap if a full confession is not forthcoming.  I don’t want to give too much of this away, but Dol is the only person who realizes the importance of a pair of gloves to a murder by wire, and goes looking for them.  She finds them inside a hollowed-out watermelon, and just exactly why and how makes for a fascinating few chapters.  Perhaps readers didn’t like that Dol is a self-declared “man-hater” who refuses romantic involvements coldly and vehemently; what we might describe today as a bristly and angry early feminist.  To me, that’s fascinating, but it might not have been what the reader of 1937 was looking for.  For whatever reason, this was the first and last Dol Bonner novel.  She reappears a couple of times later on in the corpus, notably The Mother Hunt where Archie needs female operatives to act as nursemaids, and she appears to have spent the rest of her life running her own agency. The source novel engendered a made-for-TV movie from 1992 called “Lady Against The Odds” which stars Crystal Bernard … I’m not a fan but it has its adherents.

I think this is a vitally important point in the history of the 20th century female private investigator novel and I urge you to find a copy for yourself. My own favourite is, as usual, the mapback version from Dell but the first edition is also strongly graphic and beautiful.  I gave a copy of this to a mystery writer friend of mine who intended to teach a university class on feminism and mysteries. Nora Kelly’s comment to me was, “Why does no one KNOW about this?” You may share her pleasure.

Tecumseh Fox mysteries are … meh. They’re well written and not stupid, but they’re missing some essential spark of vivacity that they require, and Stout had missed whatever it was.  Tecumseh Fox is a “quirky” private investigator but no one ever comes right out and says anything about him that makes much sense in that context. To me he just seems grumpy and unpredictable, but energetic and 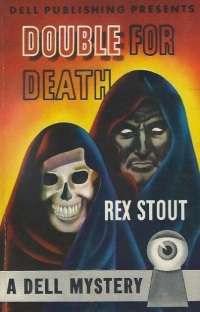 interested in solving his cases. The first one, Double for Death (1939) is everyone’s favourite but mine; I actually prefer both the other two, 1940’s Bad for Business and 1941’s The Broken Vase.  Double for Death has a bitterly ironic twist in its finish that everyone enjoys; for me the central clue is telegraphed. Both the other two exhibit more subtlety in clueing. Stout reworked Bad For Business as a Nero Wolfe novella, “Bitter End”, in the same year, so apparently he liked the idea but not the characters.  The location of the central clue is certainly amusing, and the puzzle depends upon the reader being quite acute about a casual remark by one minor character, which I like.

Red Threads is a 1939 mystery starring Inspector Cramer, Wolfe’s constant antagonist, who here is sympathetic and helpful. The protagonist is a young female fabric designer — she shares her avocation with Stout’s wife Pola, and so that part of it is intriguing and interesting and rings with truth.  There’s a bunch of hooey about what are called “Indians” (in my part of the world the preferred term is “First Nations”), and it is so stereotyped and awful that it seriously mars the book for me.  The book is centred around a romance and ends happily; Stout was good at writing those romantic stories, I think. 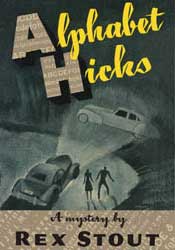 Alphabet Hicks (1941, also published as The Sound of Murder) is about a detective named Alphabet Hicks who is pretty much the same person as Tecumseh Fox.  He’s quirky and unpredictable but there is nothing real underneath the quirks.  His one outing depends, unfortunately, on convincing the reader that two people’s voices sound exactly the same and would be mistaken one for the other. That may be the case, but it’s a story that is hard to tell in the written word. 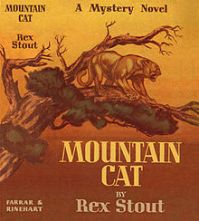 The Mountain Cat Murders (1939) is set in a small town in Wyoming and features a spunky young woman trying to solve the deaths of her father and mother. The “Mountain Cat” is a glamorous, wealthy, and often-married playgirl who is easily the most interesting character in the book; the mystery is competent but essentially dull. One point in the solution involving an illiterate miner is … far-fetched.

Honestly, I can’t recommend that you track down and read How Like A God, Stout’s “breakout novel” of 1929 that brought him to the public’s attention. It took me a few years to find a copy and I was almost sorry I’d found it, since the anticipation was much, much more pleasant than the achievement. This is a novel written in the second person, and I hope — sorry, you hope you’ll never have to go through that again, because you find it so damn disconcerting and unnecessary. It also has some of what a friend of mine calls “steamy bits” which are not as steamy as they must have been in 1929; as well, Stout seems to have been rather prudish about saying what he was getting at. 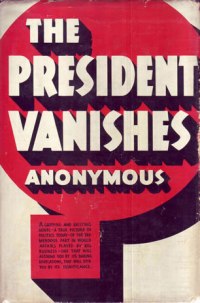 Much, much more interesting, I trust, is The President Vanishes, Stout’s one outing into the “political thriller”, published anonymously in 1934. There is a lot of stuff here that I wish I had the education in American history to be able to appreciate; it is clear that Stout is taking off “brownshirts” and fascism, and political laziness, and the far right wing. There is a lot of social history material here that I am only poorly equipped to grasp. What I do see is that Stout had the knack of writing a suspenseful thriller; if he had started writing them later on into their history, I think he would have produced some good ones.  There was a money-losing eponymous film made the same year; the film was protested by a Catholic morality organization for no really good reason that I can see, but again, this is social history beyond my knowledge. The book itself you may find boring and antique; I would actually agree but gee, there are the bones of a damn good book buried in there.

There are other novels and stories; I understand that a very early story whose events form the basis for Fer-de-Lance and a few uncollected pieces have just very recently been collected, so there’s something out there for even the most well-read Stoutian. There is a strange “lost world adventure” called Under the Andes from 1914, there are a couple of what I think of as Oppenheimerish Ruritanian romantic stories, and just generally a handful of stories from the slicks that don’t prefigure much of the excellence which Stout was preparing to achieve with Nero Wolfe. Nothing especially stands out unless you happen to be interested in the cognates of Edgar Rice Burroughs’s Pellucidar stories. And finally, Forest Fire (1933) is a novel with some early LGBT interest that may make you think of Rod Steiger in The Sergeant; it’s tough going as a novel, though, especially since this is another one where Stout is being oblique and prudish.

9 thoughts on “The Tuesday Night Bloggers: Some lesser-known titles by Rex Stout”